The churchyard is now closed for the burials other than existing graves where there is space for the internment of ashes or a coffin. 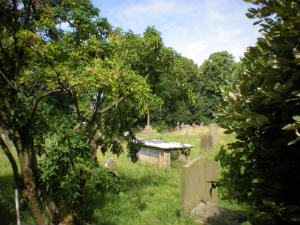 Records for the churchyard are maintained in the Parish Office.  There is a standard charge for a search in the Registers.

We are a small group who try to maintain and extend the biodiversity of the churchyard.  This is a rare undisturbed ground set within the housing and close mown grass of the local area.

We organise activities such as Bat Walks and guided tours to find interesting plants and graves and conduct bird surveys.

We would welcome new members who:

For further information contact Diane Collins via the Parish Office.

We hold occasional informal meetings as and when necessary and in one of the Group members’ homes when we discuss current Living Churchyard activities and make plans for the future.

Partnership Working The Living Churchyard project started in 2002 when one of our members was awarded a Millennium Fellowship to travel to Ghana.  In return she had to undertake a project in her own community.  This opportunity satisfied a long-held wish to look at the biodiversity of the churchyard.  Initially a finite project it has grown to be no longer a project but an on-going part of our church life.  It was soon clear that it was more than a one-person task and a small management group was formed.  We became aware of the Living Churchyards and Cemeteries Project then a joint work between local authorities, dioceses and local wildlife trusts.  Sadly our local wildlife trust had to pull out recently though only after giving us much help.  We continue to work closely with Bracknell Forest Council (BFC).

Mowing Regime Our churchyard has been legally closed some 35 years ago meaning there can be no new graves and that the local authority has responsibility for grass cutting and tree and wall management.  In order to balance the biodiversity and the other uses to which the churchyard is put we have developed a cutting programme with BFC:  the north half is cut twice yearly in July and October in order that both spring and summer flowers have time to set seed.  The cuttings are left for a short while for seed to settle and any invertebrates to go and then raked.  The south west quarter, where there are a number of maintained graves is cut monthly April to October or as necessary to allow safe access and the south east quarter is close mown to keep a tidy area around the main door and Garden of Remembrance.  This latter is done by the Church Work Party (qv).  Details of the cutting areas can be found on the interpretations installed in the churchyard.

Biodiversity Action Plan (BAP) Each local authority creates a Biodiversity Action Plan (BAP): we try to work to encourage as many species as possible from BFC’s  BAP.  For many years the churchyard has been one of the few sites within the Borough with Devil’s Bit Scabeous – in flower in the NE quarter in August-October.  We have sown Cowslips from locally harvested seed - these are thriving in the short-mown areas – and we hope, with BFC’s permission, to gather seed of Ragged Robin this year too. Stag beetles are known to live in a rotting tree stump in the holly hedge to the east.  Further rotten wood has been incorporated nearby to encourage more beetles.   The yew tree near the main gate has often been recorded as very ancient but a recent survey deemed it to be merely a ‘veteran’, only a few hundred years old:  Ancient Tree No 10581. Bird boxes and bat roosts have been placed in the trees around the churchyard and are checked and cleaned annually.

Surveys We undertake bird surveys, also looking for BAP species and especially hope soon to see our first Red Kite.  We would like to undertake further full surveys of plants, lichens, mosses, invertebrates and small mammals: anyone willing and able to share these skills would be most welcome.